Nogueras Blanchard is pleased to present an exhibition by Rafael Pérez Evans (Málaga, 1983).  Pavo Realengo gives title to a new installation by the artist, occupying the gallery space in l´Hospitalet, Barcelona.
During the colonial period until shortly before the end of the empire, Brazil was characterized by a system of production based on slavery, which worked almost entirely in sugar mills. The places where slaves lived were called senzalas, these were very simple constructions usually made of wood and mud and did not have dividers, only straw on the floor to sleep.
Legend has it that in April 2004 in Rio de Janeiro (Brazil) an albino peacock was brutally murdered in the park located in the centre of the city. The animal belonged to a group of transsexuals prostitutes who worked in the park. Days later they found the body of the attacker crucified on one of the fences in the park.
These two different moments in time are the starting point for Rafael Pérez Evans to construct a new narrative. Pavo Realengo is an action in which the artist reactivates a rumour, metaphorically resuscitating the peacock in the gallery space which has been converted into a senzala, using minimal structures made with canes that refer to the architecture of the mills.

For a few days the peacock lives in the senzala transforming its experience into a performative action. This gesture allows the artist to give visibility to a story that was out of circulation, adding a new chapter to an oral account of a city, in which the raw is intertwined with the mythological. Brazil has one of the highest rates of transphobic deaths in the world. This macro reality, hatred and homicide towards trans women, connects with a micro fact, the death of the male albino peacock. The trans identified with the peacock for its strange and exuberant beauty. The animal also functions as an allegory of a marginal social reality where these groups of women survive and struggle in a context of hostility.

The artist invites the public to travel through the space and cohabit temporarily with the peacock. To accentuate the experience of estrangement, Evans places a light effect, inspired by Fassbender’s film Querelle, which bathes the space in an orange hue thus obtaining an artificial chromatic atmosphere. If at first the warm light generates a tropical image characterized by the exotic and pleasurable, it becomes, together with the majestic presence of the peacock, a twilight experience where the spectator is touched by the brutality of the story. Realengo, in Portuguese, means marginal, far from royalty; the peacock despite being ‘real-royal’ is relegated to misery, in the words of Evans “when you are surrounded by ugliness, beauty is inappropriate.”
The practice of Rafael Pérez Evans collects research methods of ethnography. He is interested in “digging” and circulating lost histories, gestures, images and local rumours that he re-eleborates formalizing them in installations, performances, images and objects and thus build narratives of micro-resistances within a new historiography.

Notes of animal welfare: Rea the peacock was bought and collected from a small farm in which he lived in a 2×3 m2 cage, he was part of the exhibition and then released into an large open garden space in the mountains of Barcelona where he is living amongst other animals and kindly being cared for by a family of farmers. 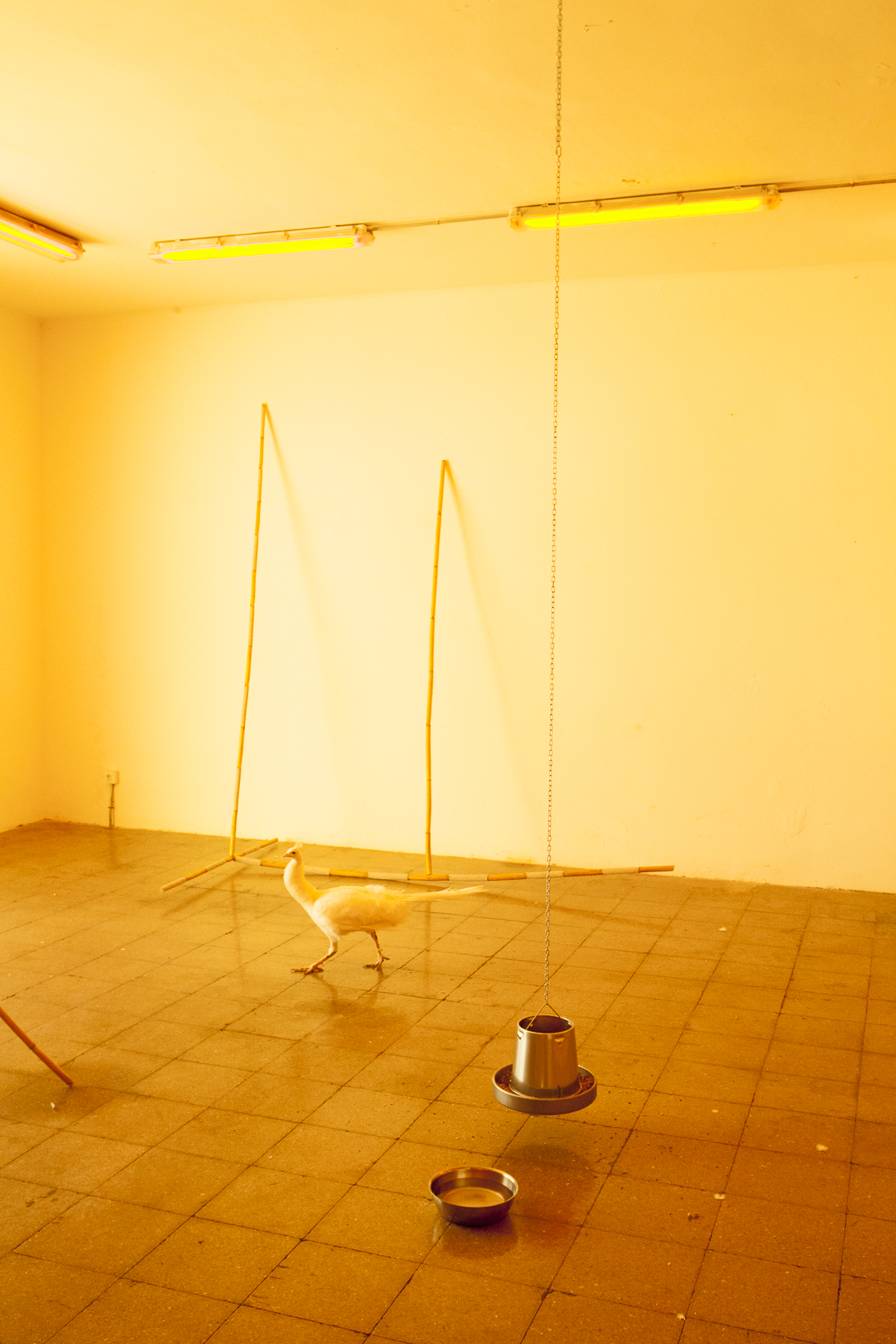 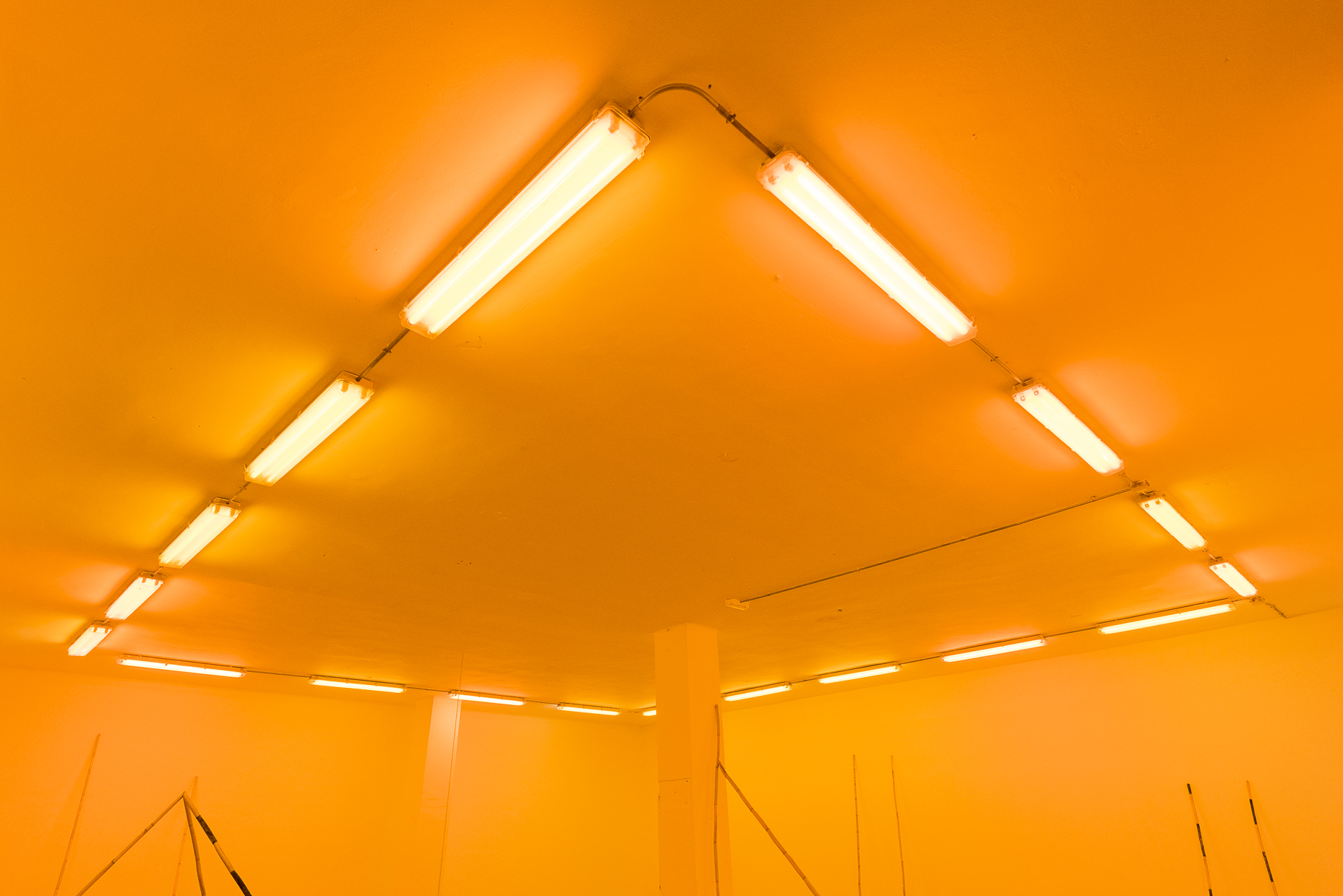