Grounding, a site-specific intervention exploring some of the tensions in visibility between the rural and the city. Fusing a monumental gesture of farmers’ protest with a simple therapeutic ritual. ​The artist will explore ​grounding the large Ben Pimlott glass building in Goldsmiths college, by dumping 29 tonnes of fresh unwanted carrots into it. Bringing into contact two disparate forms: a large contemporary glass university building and fresh carrots, Perez Evans borrows the gesture of dumping from European farmers’ protests to transform it into a sculptural tool for grounding​. ​The therapeutic technique of grounding involves doing activities that “ground” or electrically reconnect you to the earth.

Dumping is a form of protest, regularly used by European farmers that react against a central government which devalues their labour, agency and produce to points of ridiculousness. This devaluation often produces an enforced invisibility, which is often reciprocated by farmers who create hyper-visible gestures by dumping their devalued produce. Vegetables such as carrots or potatoes become monumental barricades that can block governmental buildings or roads and with it interrupt the usual city flow. T​ he city is a site that suffers from food, plant and soil blindness, a place hyper separated from its periphery, its food and its labourers. Dumping protests bring blinded city people into an alarming contact with their forgotten foods and its production.

The produce in the piece are unwanted carrots, carrots that the food industry in the UK deems not worthy of shelves, the full 29 tonnes of vegetables will be collected after the exhibition and sent to feed animals. This site-specific intervention offers itself as a sculptural exercise in ​grounding, ‘bringing back to earth’ some o​f the dissociative and opaque practices of the metropolis and the university industrial complex.

Pérez Evans’s installations are usually associated with questions around sculpture, rurality, the urban and conditions of the South. He reconfigures readymades, live materials and gestures into installations that attempt to address a central concern in his diverse production: rural shame, its anger and hope. Oscillating between forms and borrowed gestures which are often bare, futile, humorous and crude he explores paradoxes in historical, social and political themes that disorientate a compass of western progress. 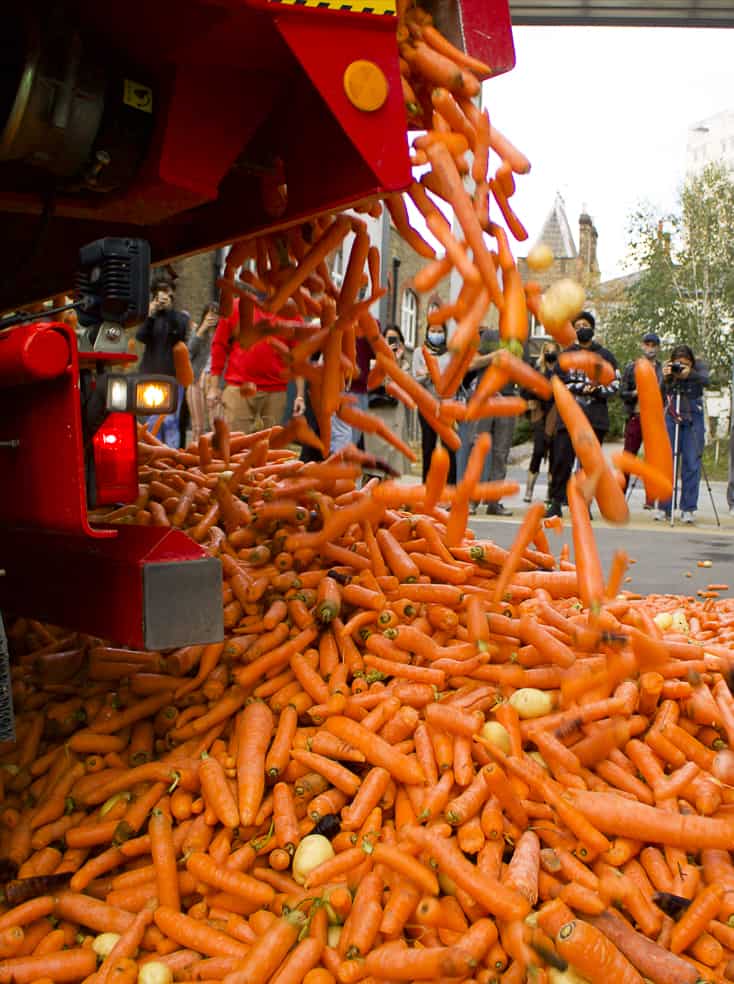 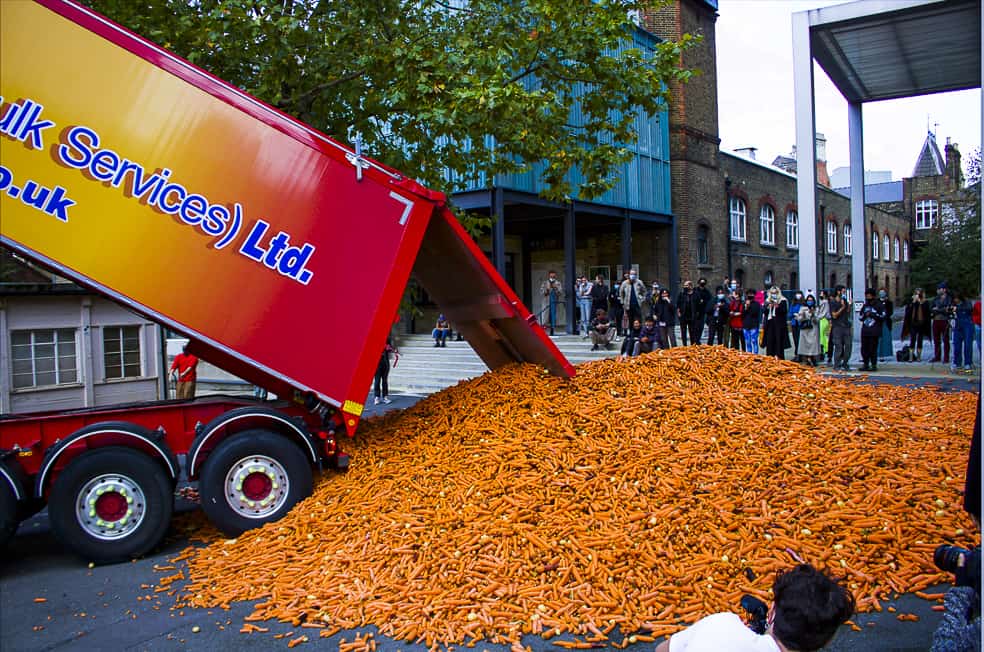 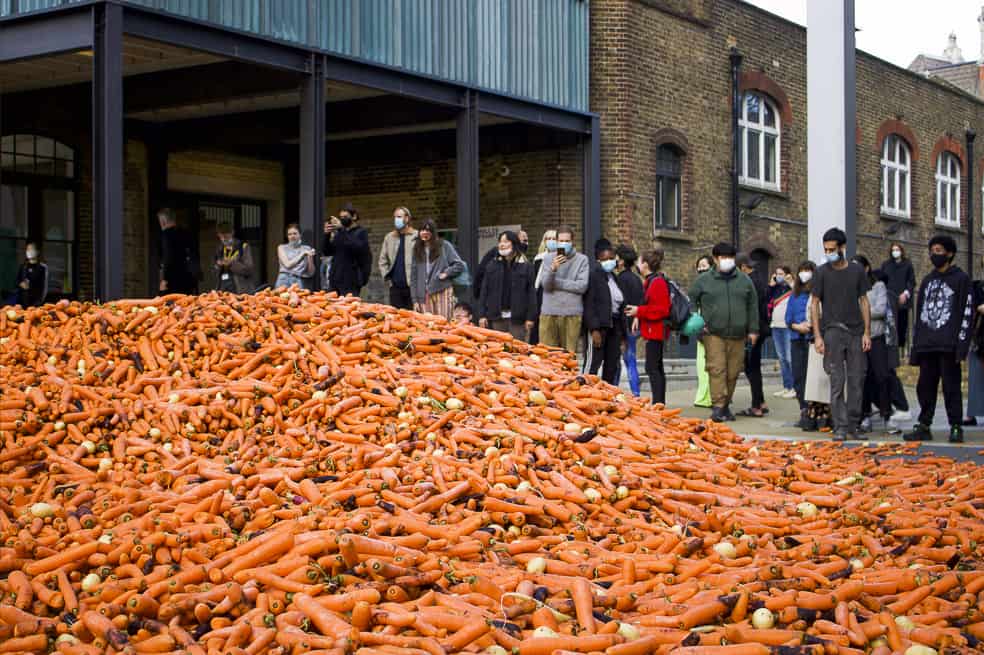 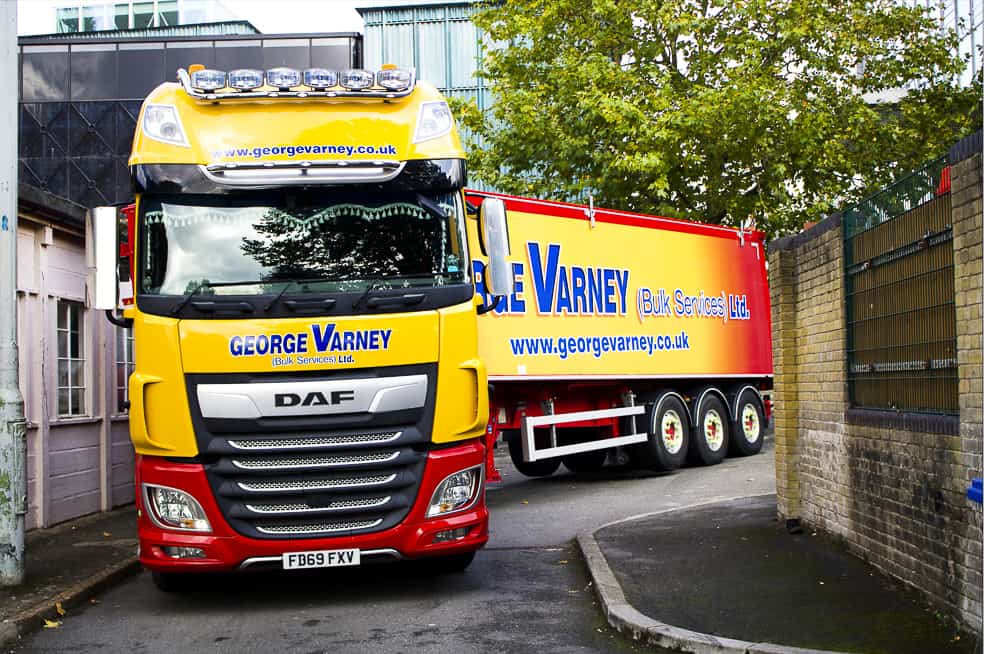